Which State Is The Happiest? 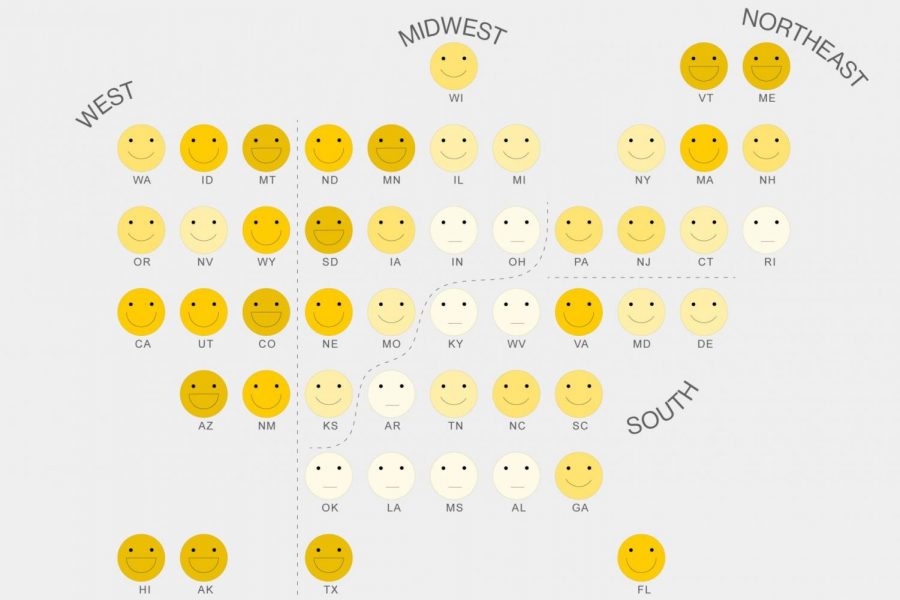 It’s important to be happy where you live right? Well let’s look at the top five happiest U.S.states to live in.

Coming in at fifth is California. Weird, considering that many people around here say they hate it. But what is it about California that makes people so happy: the beaches or the sun? It ranked fourth overall in physical well-being. California is also in the top five for low adult depression rates.

Number 4 is North Dakota. Ranking high in all categories: sixth in physical well being, ninth in work environment, and tenth in community environment. It ranks in the top five in highest adequate-sleep. North Dakota is also number one in lowest long-term unemployment and first in income growth, but you better be okay with long hours as they rank in the top five for most worked hours. It’s also low in the rate of divorce. So, if you you want enough sleep, to have a nice job, and a long marriage, North Dakota is for you.

Third in line is Minnesota. The cold must be good for your happiness, considering they rank second in physical well-being, sixth in work environment, and tenth in community environment. You might have to like sports to live here though as they are fifth in sports participation. Selflessness is also important here, as they are third in volunteer rates, maybe that’s why they are in the top third safest states. 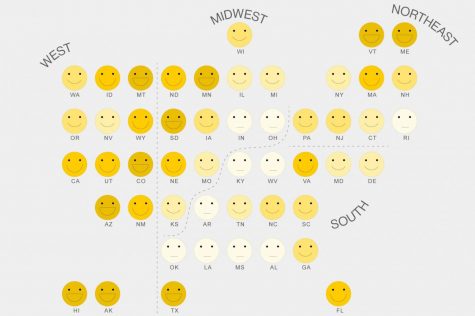 Utah takes second in the list. A little surprising. Maybe it’s because they are number one in fewest worked hours and also they lowest divorce rate. Utah is fairly low in physical well being, but are first in work environment and second in community environment. They are also second in sports participation. Utah is also ranked in the top five safest states and also have the highest volunteer rate. Unfortunately, they have a very high suicide rate. If safety, a good work environment, a great community  and if you like to play sports volunteer Utah is for you.

So what’s the happiest U.S. state? Out of three Thunder Ridge Students, one guessed Idaho and 2 guessed Hawaii. Yep, those  two students are right. It’s Hawaii. No big surprise, because it is paradise.They are first in physical well-being and in the top five of community environment. It’s low in work environment, but who really wants to work if they live in Hawaii!?! Tropical might just be great for happiness,as Hawaii has the third lowest adult depression rate. But with all those activities you better not love sleep, because Hawaii is ranked low in adequate sleep.

Where is Idaho? Our great state is sixth, which is a little surprising that we are this low, considering we our one of the fastest growing states. We are pretty low in physical well being, but have the best community environment and are second in work environment. As citizens here, do you think we should be higher or lower? Thunder Ridge Freshman Brynie Shears says “I think we should ranked lower, because people around here are depressed.”

Are you depressed? Or are you happy to be in Idaho? It’s something to consider as life starts making you decide where you want to be.