The Year of Marvel 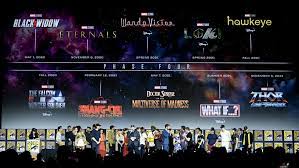 This year, Marvel has announced some exciting new projects set to be released this year. These new movies and shows are setting Phase 4 of the Marvel Cinematic Universe into action. A couple of these shows have already been released, but there is still more to come.

Starting January 15 of 2021, Marvel’s show Wandavision was released to Disney Plus, on the official Marvel website. It describes Wandavision saying, “The series is a blend of classic television and the Marvel Cinematic Universe in which Wanda Maximoff and Vision—two super-powered beings living idealized suburban lives—begin to suspect that everything is not as it seems.”

Next is the show Falcon and The Winter Soldier, the first episode being released March 19th, the show is about the superheroes Falcon and The Winter Soldier. In an article written by Brian Truitt for USA Today he says, “The new series finds Sam, an Air Force veteran, working with the military on missions while Bucky, Steve’s childhood best friend and fellow World War II soldier, is having an existential crisis and making amends for decades of subterfuge and murder as a brainwashed assassin.” Truitt then goes on to say that the two have to pair up when America needs new heroes after the loss of Captain America.

After this show ends, the highly anticipated Black Widow movie is set to be released on May 7th in theaters. This movie will be set in between Civil War and Infinity War, and hopefully fans will get a look at Natasha Romanoff’s mysterious past. Next up on June 11th, Loki will be released and is set to be about an alternate universe version of Loki.

In the following month on July 9th, the movie Shang-Chi and the Legend of the Ten Ring will be released; however, not much is known about this movie. Two months later Marvel fans will have The Eternals movie which is about a group of powerful beings but not much else is known yet.

The last project with a set release date of December 17th, Spiderman 3 No Way Home, follows Peter Parker and his friends. Marvel fans can also expect the shows Hawkeye, What If, and Ms. Marvel sometime in late 2021. It seems like Marvel has not left their fans hanging this year and they have a lot to look forward to.