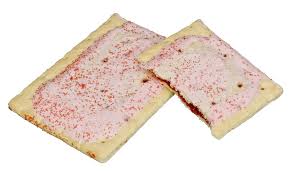 Poptarts. Many can arguably say that the Poptart has always been the best snack and breakfast treat for many years. Kellogg invented the Poptart in 1964, and since then has been a household name and common food. But have you ever wondered if the Poptart is a sweet ravioli or a folded pie?

I will ask more about this question and record the opinion of two people on this matter, but first how could the Poptart be both a ravioli and a folded pie?

Sweet Ravioli. Wikipedia says how a ravioli is, “…a type of pasta comprising a filling enveloped in thin pasta dough.” The Poptart looks very similar to that. John Gil, a resident here of Idaho Falls takes the stance of how it’s a sweet ravioli. Gil goes on to mention, “It has filling in the middle, as the ravioli does, and it already looks like an envelope, and it also has that topping that ravioli would usually have. The ravioli has cheese on top and sauce, but the Poptart has frosting and sprinkles!”

Although there is one flaw to John’s thinking, that he himself recognizes, “Ravioli is served in a sauce or wine I understand but that still does not make my point not invalid.”

Next reasoning, Folded Pie. I also talked to Tony Gil (brother of John Gil) about this matter, in which he took this stance of a pie. Wikipedia when asked about the definition of pie it mentions, “A pie is a baked dish which is usually made of a pastry dough casing that contains a filling of various sweet or savory ingredients.” So what does Tony say? “Of course it is a folded pie! It has everything that a pie should have. It has a fruity filling and has a crust. It is a folded pie!”

But once more there is a flaw, pie does not have frosting or anything on the top.

So ladies and gentlemen, after reading this and finding the opinion of fellow residents, what do you guys think it is? You can participate in our survey to find out which it is and also help you see beyond the Poptart.